The Kingdom of Golf

Welcome to The Kingdom of Golf Experience School!

To Book a Lesson please click here: The Kingdom of Golf Experience School

In early 2008, the owners (Debby King and Nancy Woodke) of The Kingdom of Golf Experience School didn't even know each other. Little did they know that their tears of sorrow would turn to tears of friendship, love, and honor.

In February of 2008 Nancy lost her husband and best friend who fought a courageous battle with cancer. After several months of being lost in grief she decided to return to golf. This prompted her to seek out some lessons. This is where she met Debby. The two of them hit it off immediately and forged a great friendship. In January of 2010 cancer took first Debby's dad, then in April her brother-in-law, and then in June she also said goodbye to her mom.

In 2011, Nancy sold her family home and bought some property in south Eugene. In 2012, Debby sold her home and they began to build a home business. As a tribute to their lost family members, they devoted their time and finances to the building of a dream in an effort to keep their family memories alive, and thus became KingWood Key, LLC and The Kingdom of Golf Experience School. 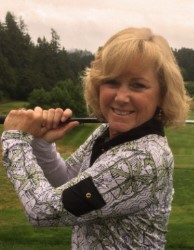 Debby is a multiple award winning PGA and LPGA Class A Member. Most recently, the 2021 Oregon PGA and the 2021 Pacific Northwest PGA Player Development award and the 2020 Oregon PGA Teacher of the Year and in 2015, King was awarded the LPGA National Professional of the Year, 2012 PGA Pacific Northwest, Oregon Chapter Junior Golf Leader of the Year. Debby played the Futures Tour, the Asian Tour & multiple exemptions on the LPGA Tour. As a player, King won the 1991 Massachusetts Women’s Open, 1993 PGA West Tennessee Assistant’s Championship and in 1995 the Tour America Championship. King coached Division I Collegiate Golf as the Head Women’s Golf Coach at the University of Memphis and the University of Notre Dame. Her teams at Memphis won 6 individual tournament titles. In 1997, King was named Conference USA’s Coach of the Year, which led her to become the LPGA National Coach of the Year. In 2001 she guided the Fighting Irish women’s golf program to 11 team tournament victories in her tenure. She took Notre Dame to the program’s first ever trip to the NCAA Tournament.

Nancy retired in 2019 after 22 years in Title I and Kindergarten with Eugene School District 4J. She combines a love for golf and people (especially children) with a successful amateur golf career. She grew up in Eugene and played competitive golf for Sheldon High School where she was the two-time OSAA State Champion. She played collegiate golf on scholarship for the University of Arizona and later the University of Washington. Nancy won the Pacific Northwest Women’s Amateur before focusing on raising a family. After more than two decades away from competitive golf she finished second in the 2009 Oregon Stroke Play Senior Championship. Now a member of the LPGA and a certified U.S. Kids Golf Instructor, she wants to help others reach their golf potential.

Ready to Reserve your Tee Time?